Let’s talk about classification. “But the title says regression!” might be a first thought. We’ll get there. Classification is what the name suggests–you need a model that classifies or segregates incoming data into 2 or more groups. For the majority of this, we’ll talk only about binary classification–when there are only two classes. As you’ll see, it’s easy to adapt a binary classification algorithm to multiple classes.

being the output variable, in binary classification,

. For classification, we can modify our hypothesis function to

Here’s how this function looks:

As you can see, the logistic function is bounded between 0 and 1. This makes it very convenient to use it for classification, because if the output of our hypothesis function is above 0.5, we predict 1; otherwise, we predict 0.

Besides changing the hypothesis function, what we do is pretty much the same as what we do in linear regression (the math changes, obviously). We start with an initial guess for

, and try to tweak it so that the cost function

is minimum. So basically, we’re performing regression, but cleverly using a function that’s bounded between 0 and 1, which lets us use this for classification. And this is why logistic regression is put under classification algorithms.

This equation says the same thing we put in words.

Using the above equation, we can see that there’s a point at which the logistic regression model changes its decision. We can work on the features and tweak the parameters to get decision boundaries of many shapes. Let’s see some examples.

Let’s use the following imports in Python:

Then we create linearly separable data:

values and visualize them.

This gives the following on my system. This will be different on every run. 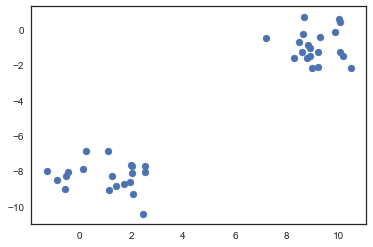 Let’s say we found out the value for

Let’s define the hypothesis function. Remember to append the 1s!

Let’s also make an array that assigns classes to each point.

And finally, we plot a decision boundary, which in this case is linear.

Here’s the output on my machine. (btw, sorry for the lack of syntax highlighting; it was incredibly annoying to get it to work, and I gave up in the end).

Here we have our linear decision boundary for the theta that we chose. Let’s now try and get a nonlinear boundary.

After a little fidgeting on Stack Overflow, I was able to generate the perfect dataset to demonstrate this.

And then, visualize it as before: 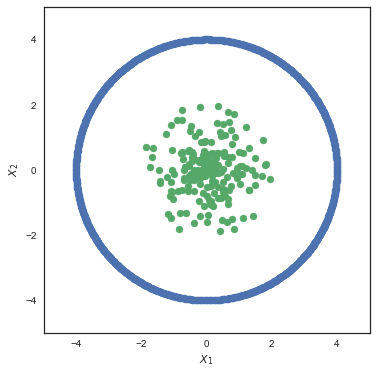 Fantastic. A nice test dataset that’s separable by a circle. Let’s look at how we might do this. We’ll have to modify things a bit first. Clearly, passing a linear function like what we’re passing to the sigmoid function above won’t work. But we still do need to fit to a logistic function (because that’s the point of this post!), so that part can’t change. And we don’t exactly want to change the fact that we’re passing in

either. We really like the way things are. So what do we do?

Let’s change some features. The decision boundary, we can see, is a circle. So instead of using

as features. Playing around with features like this is certainly allowed; we even have a name for it! This is called feature engineering. Since I made the data, I can tell you that a valid value for

. Just to be clear again, we’re still passing in

to the sigmoid function, but now,

Equipped with our new game plan, let’s do this in Python: 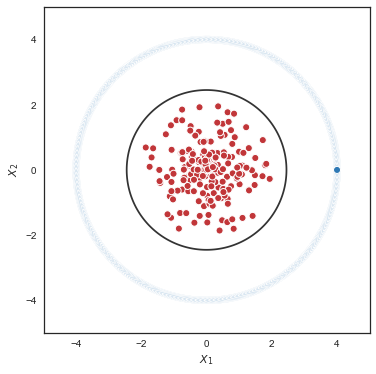 Note on math: This section has some probability and statistics concepts. You can skip that part if you’re not comfortable with these concepts.

is non-linear, the least-squares cost function becomes non-convex. Alright, so what’s the big deal? The trouble with non-convex cost functions is that they have local optima. What does this mean? Remember how we’re trying to find the lowest point in the cost function? And that we’re taking small steps? With convex functions, this works because there’s only one minimum. Non-convex functions can have points that are lower than their surrounding points, but they’re still greater than the global minimum that we’re really after.

So we need a new cost function. How do we find one? Statistics provides a promising direction: the maximum likelihood estimates. This is based on the likelihood function. Let’s derive this (math ahead).

Note: If you’re not familiar with maximum likelihood estimation, I now made a post explaining it, you can read that post to get a good intuition about the method, and then come back here. Link to post.

Given this, we can combine these to get:

You can verify this by plugging in

in this equation to get the previous ones. The likelihood function is then given by,

is read as “probability of

The principle of maximum likelihood then states that we should choose

to get our final cost function.

This function is now convex, and can be optimized using gradient descent.

Let’s now find that derivative as we did with linear regression. To do this, let’s first find the derivative of the sigmoid function. 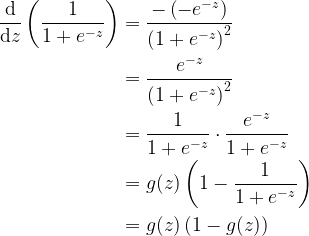 We’ll need this to find the derivative, and as we’ll see, this plays out very nicely: 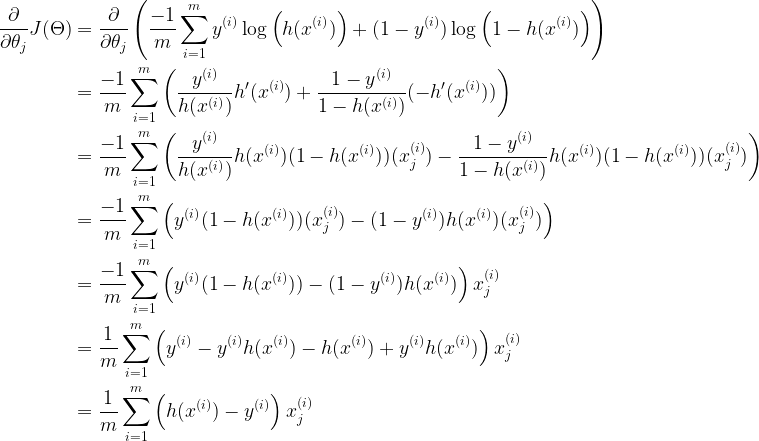 Let’s go over these steps.

and so we get an extra

term because we’re finding the derivative with respect to

Nothing fancy except for the first two steps, really. We can then perform gradient descent exactly as we did in linear regression, only this time, the hypothesis function is different.

With this, we wind up our discussion of logistic regression. To recap, discussed

One thought on “3 – Logistic Regression”