Note: This is based on Andrew Ng’s course at Stanford University, but I culled information from other sources that I’ve attributed appropriately as well.

Alright, we’ve talked about a one-vs-rest implementation for multi-class classification using logistic regression, now we’ll look at the other method, softmax regression. If you recall, we specified an additional parameter, multi_class=’ovr’ while training a multi-class logistic regression model in sklearn. That’s because the default algorithm used is softmax regression, which is based on the multinomial distribution. In this post, I’ll try to explain how exactly this algorithm works. This post is pretty much all math, but hopefully I’m lucid enough to be understood.

This method is heavily based on statistical concepts, but I’ll try to go slow and explain everything one by one (this might turn out to be a long post).

I can’t think of a better way to explain what a probability distribution is than the way Wikipedia has phrased it:

…a probability density function (PDF), or density of a continuous random variable, is a function, whose value at any given sample (or point) in the sample space (the set of possible values taken by the random variable) can be interpreted as providing a relative likelihood that the value of the random variable would equal that sample.

Easy, right? It’s a function of a “random variable”, which gives the likelihood of that variable taking on specific values. There are several distributions–binomial, exponential, Gaussian, it’s a huge list. You may have encountered these in a probability class.

Let’s now look at one particular example, the Gaussian (this is just an example, really). The Gaussian is a function parameterized by its mean,

. If we vary these parameters, we get different Gaussian distributions, as shown below:

Clearly, the Gaussian is a whole family of probability distributions. This is the case with other distributions as well. Let’s now generalize this.

Let’s talk about all these variables:

Many common distributions such as the Binomial, Gaussian, Weibull, and Poisson are examples of distributions that belong to the exponential family. More importantly to our discussion, the multinomial distribution, an extension of the Bernoulli distribution, also belongs to this class.

followed a Bernoulli distribution. Similarly, although not mentioned, the linear regression, which used a least-squares cost function, assumed that

Let’s now work towards a (generalized linear) model for multi-class classification. Since we have, in general,

classes, our predictor variable follows a multinomial distribution, that is,

To decide on parameters, we could choose

. However, this leads to a problem. To understand why, let’s first look at the Bernoulli distribution (the one we used for logistic regression), and then come back to the multinomial. Recall that

for logistic regression. We define this value as a parameter. Thus, we have:

The second equation follows from that there are only two possible outcomes, 0 and 1. Here, we have one parameter,

That is, the sum of the probability values for each possible output value should sum to 1. We could certainly do this for our multinomial model:

The issue is easier to see now. With all these parameters, we have

But now, the parameters aren’t independent. That is, one parameter is redundant, because we can get the last parameter by subtracting the sum of the others from 1. The fix is easy: we simply remove one parameter, and like the Bernoulli model, the last “parameter” is

parameters. Remember: these aren’t the natural parameters. We’ll work towards that. So now we need to get an exponential family distribution. Let’s work on

, and define the vectors

is a vector, we use our usual notation and denote the

. With this framework in place, we can prove that the multinomial distribution is a member of the exponential family of distributions.

This is in the form of an exponential family distribution, with 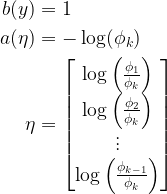 Let’s go over the steps above:

Before we proceed further, take a moment to notice how

is a vector. As we discussed way back in GLMs, when

is a vector, we have

. But wait, this means that there’s not just one

vector, there are multiple of them. In fact, we have

. For convenience, let’s throw in that last one as well, and define it as

just as before. You should make sure you understand well that we have

(but we defined an extra

Continuing from where we left off,

Substituting this in the second equation above gives us

Let’s look at what we have here. Given a vector

elements, we have a function that takes this vector and gives us another vector,

values, defined by the above equation, and subject to the conditions

This function is a generalization of the logistic function, and is called the softmax function. The case is similar to that of logistic regression, where we were actually performing regression, but cleverly choosing a bounded function. It’s harder to see in this case because it’s multidimensional.

Finally, let’s use the last assumption stated waay back in the GLMs section. You don’t need to scroll all the way up, I’ll restate it here: we assumed that

s is a vector of

dimensions. And thus, our final softmax regression model is

The model will output a vector: 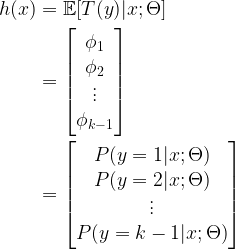 Notice that the above only outputs a

dimension vector. We can find

With our model finally defined, all that’s left to do is figure out how to find the optimal values of the parameters

Credits: I got stuck myself in the last part of this derivation, and this answer at CrossValidated helped me proceed.

To find the optimal values of

to fit the data, we use the now-familiar technique of maximum likelihood estimation. As always, we’ll start with the log-likelihood function. Here, we’ll just directly write it down without writing the likelihood first. 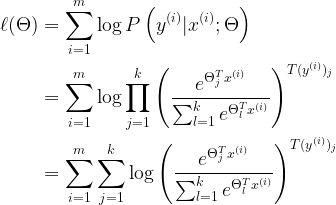 Now we have the derivative of the softmax function. If you look at the log-likelihood function again, you’ll see that we have a double summation and a log as well. Let’s take care of one summation and the logarithm now: 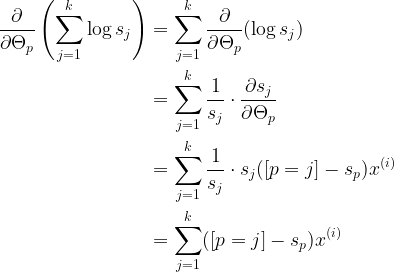 The steps here should be fairly easy to follow, it’s just a simple application of the chain rule. However, the original log-likelihood function also has a

exponent. This really isn’t a problem:

At this point, let’s note that

, and so we can use the Iverson notation again. This will be useful for us in a minute:

I’ve done quite a bit of shuffling of terms here, so let’s take things step by step.

You should work these steps out if this seems like a big jump. Next, let’s simplify some terms.

And finally, computing the gradient of the log-likelihood function,

Unfortunately, we can’t really do much analytically here. It doesn’t lead us very far towards finding the maximum likelihood estimates. However, this expression is nice and simple, and we can use a computational method to find the minimum values of the parameters

Let’s now recap what we’ve seen in this blog post.

We’ve covered a lot of ground in this post. Let’s review.