Having seen a classification model, we also need to know how to evaluate its performance! After all, if you don’t know how well (if at all) your model is doing, you’re heading for disaster. This post has practically no math at all.

Let’s begin by stating some definitions. The ground truths of a dataset are the class labels in the dataset. These are the true values of the classes (this also applies to regression: the ground truth is the actual

value for each training example).

Suppose we use a train-test split, which means that we don’t train with the full dataset–instead, we split it into a train and a test set. Standard values for these are 70% for training and 30% for testing. We train the model on the training set, and make it predict on the remaining 30% so that we can see how well it performs on data it’s never seen before.

With all this in mind, we can now talk about the confusion matrix.

The confusion matrix is simply a matrix, or table, of the counts of everything we defined above. For a binary classification task. Here’s a very crude representation:

Of course, the confusion matrix will be different with multi-class classification, and we’ll see it when we use models in practice.

Given the confusion matrix, we can now begin to define the metrics to judge our classifiers. 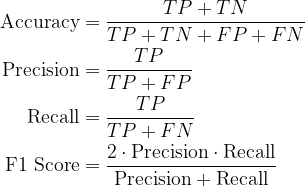 Hopefully it’s easy to understand that TP, FP, etc. are just the short versions of true positives, false positives, etc. Accuracy is pretty intuitive, but the others aren’t, so here’s one way to think about them:

Another commonly quoted metric is the receiver operating characteristic (ROC) curve. This is a curve drawn with the true positive rate (recall) on the y-axis, and the false positive rate (

) on the x-axis. This is done only with binary classification tasks.

systematically, we obtain many values of true positive rate and true negative rate, and we can join all these points to form a smooth curve. This curve is the ROC curve.

Clearly, the ideal ROC is one that just goes up the y-axis till the top-left corner, and then goes along the top of the graph. This however, is almost never doable, since it implies that the algorithm absolutely never goes wrong at all.