We’ll discuss several metrics here. The metrics listed here are not at all exhaustive, but are the most commonly reported and used.

How do we define the distance between or within clusters? Is it the maximum distance between any two points? The minimum? Or perhaps the mean or median? We can use any of these, and what you choose depends on what your goal is. Let’s now look at some clustering metrics.

Wikipedia has an excellent article on this [1], so we’ll follow the notations used there. Suppose we use a within-cluster distance metric

. This can be the maximum, minimum, or mean/median of all this distances between two (distinct) points in the cluster. You could also compute the average distance between all points and the cluster mean. Now, let

denote the distance (with any definition) between clusters

clusters, the Generalized Dunn index (GDI) is defined as

The Generalized Dunn index is computationally expensive to compute, especially as the number of clusters increases. This is its main drawback. You should note that because the denominator uses max, that the Dunn index is a worst-case (lower bound) score. This is because if every cluster except one is compact and clearly separated from the others, but the remaining one is not compact (that is, the within-cluster distance is high), then the Dunn index reduces. You should use other metrics along with the Dunn index to get a better idea of the clustering validity.

to be the minimum distance between points in the two clusters, and

to be the maximum distance between two points in the same cluster, we get the Dunn index.

The Baker-Hubert gamma index is an adaptation of the Gamma index of correlation between two vectors of data [2].

Suppose we have two vectors

. Then, two given indices

are said to be concordant if whenever

. Otherwise, the two indices are said to be discordant. We now compute the number of concordant pairs,

, and the number of discordant pairs

. The gamma index is then defined as

In the context of clustering, we define the first vector to be the set of distances between two points in the data (regardless of whether or not they’re in the same cluster). The corresponding element of the second vector is binary–it is 0 if the two points are in the same cluster, and 1 otherwise. The Gamma index is then computed.

From Bernard Desgraupes’ document [2], the number

th pair was in the same cluster (i.e.,

th pair in the vector

is the number of times the opposite situation occurs.

that belongs to cluster

, since we don’t include the distance of the point to itself. This may be interpreted as how good of an assignment the point to its current cluster is. Next, we find for each cluster that

does not belong to, we find the average distance of

to all points in that cluster:

Finally, we compute the silhouette value:

The silhouette index (the average of all silhouette values) lies between -1 and +1, and can be interpreted as follows [9]:

The Calinski-Harabasz index, also called the pseudo-F statistic, yields the ratio of between-cluster variance to within cluster variance [5]. This metric is used with hierarchical clustering methods. If at a given step in the algorithm, there are

is the number of data points, the pseudo-F statistic is defined as

is the between-cluster sum of squares, and

is the within-cluster sum of squares. Larger values of the pseudo-F statistic are preferred, since this implies compact and well-separated clusters.

Because hierarchical clustering does not maintain the distance between points when we form the dendogram, one might wonder how well the distances between the original data points are preserved in the dendogram. The cophenetic correlation is a measure of this, and is defined as follows [6]: let

represent the distance of

be the height of the dendogram at which

first get merged into one cluster. Finally, we let

represent the mean of all the

be the mean of all the

s. The cophenetic correlation is defined as:

We can also compare the partitions created using two algorithms. This can be used to test the effectiveness of the clusters produced. The measures we discuss here fall under external indices or evaluations [3], since we’re comparing two partitions. Therefore, to test the efficacy of your clustering algorithm, you could hold back some data, say 20%, when you give it to the clustering algorithm. You cluster this held-out data independently, say using human experts. Once the algorithm has identified clusters (using the 80% that you gave it), you give it this previously left-out (20%) data, and see how well it performs compared to the “gold standard” human clustering. Essentially, we’re labeling the held-out data. Let’s look at some metrics. First, we’ll briefly define some notation, from Wikipedia [4].

Suppose we have a dataset,

The Rand index is defined as

Intuitively, the Rand index acts as an accuracy measure for clusters, and is between 0 and 1. There’s also an adjusted Rand index (ARI), which is actually used in practice. The ARI is corrected for chance. To compute the adjusted Rand index, we first compute a contingency table: 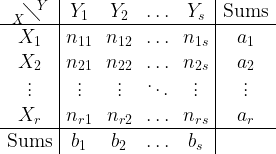 Essentially, each entry is the number of common elements in

that maps to real numbers. For each partition, we define a random variable that takes in two indices,

are in the same cluster in that partition. Using the notation above, let’s call these two partitions

. Then, the Hubert Gamma index is the correlation coefficient of the random variables

associated with these two partitions [2]:

[7] Where to cut a dendogram? by chl on Cross Validated